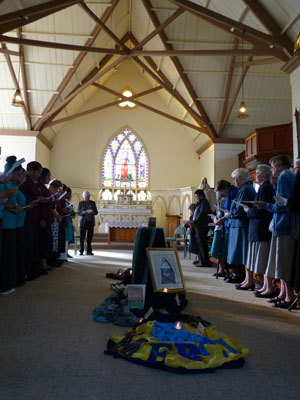 Around 50 gathered in the historic chapel at St Mary’s Convent in Ponsonby this month, to mark the 164th anniversary of the arrival of the first Sisters of Mercy in Aotearoa New Zealand on 9 April, 1850.  This pioneer group, who came from Ireland in response to an invitation by Maori women, were the first congregation of Catholic religious sisters to come to this land.

Included in the gathering were Sisters of Mercy, managers and staff from several Mercy ministries, representatives of Nga Rangatahi Atawhai Mercy Young Adults in South Auckland, and students from Mercy colleges.

A focal point created on the chapel floor included a picture of Mother Cecilia Maher and a copy of her biography, written by archivist Sr Marcienne Kirk, as well as the names of the eight Sisters among the pioneer group. A candle to honour each of these was lit as their names were read.

The karakia was led by Dennis Horton of He Waka Tiaki National Mission Team and Sisters Rossello Pepper, Tulili Ah Ping and Natalie Murphy. The ritual included a verse of Mo Maria, written by Bishop Pompallier who had blessed and opened the chapel in 1866.

Four young Mercy women spoke of how the Mercy story and its values have influenced them and the choices they are making in their lives. After the brief ritual, the group gathered in the convent dining room for a celebratory breakfast.

St Mary’s Chapel features a beautiful stained glass centrepiece depicting Our Lady of Mercy, with panels on either side depicting St Catherine and St Cecilia in honour of Mercy founders, Catherine McAuley and Cecilia Maher.