Shelter for all Public witness at Parliament 20 September

In the lead-up to this year’s celebration of Mercy Day, Sisters of Mercy from throughout New Zealand gathered with companions and partners in ministry on a pilgrimage to Parliament, focused on the theme of ‘shelter for all’.

The turn-out in Wellington of around 500, many of them students from Mercy colleges, drew attention to the fact that thousands of New Zealand families are living in cars and garages, unable to pay the costs of buying or renting houses.

“As Sisters of Mercy, we cannot stand by and do nothing,” Congregation Leader Katrina Fabish told a TV interviewer on the morning of the pilgrimage. She described the event as not political but an exercise in consciousness raising. “We believe that affordable, accessible and secure housing is a basic human right that should be available to every person. “We are responding to the call from Pope Francis in this Year of Mercy to turn the works of mercy into action.” 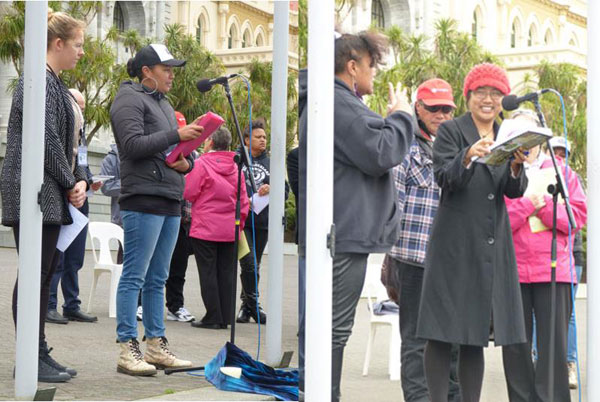 Speakers from a wide range of Mercy’s education, healthcare and community ministries spoke of how homelessness affects or concerns them. They presented books with stories and photos which their ministries had compiled to Members of Parliament, representing a cross-section of New Zealand political parties. 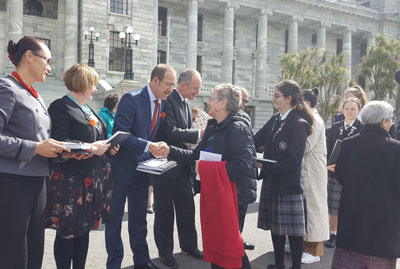 Several of these addressed the group, including Labour Party leader Andrew Little who is also Leader of the Opposition, Immigration Minister Michael Woodhouse who served for some years as CEO of Mercy Hospital in Dunedin before entering politics, and Green Party Member Marama Davidson, spokesperson for Social Housing and Maori development who expressed appreciation for the work of service and advocacy provided by Sisters of Mercy in South Auckland. 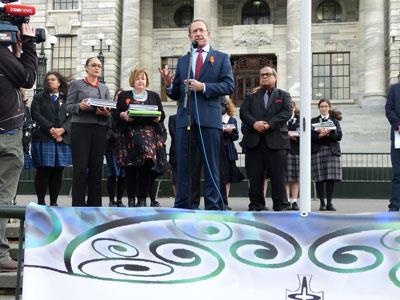 Mr Little urged the college students in the group to work at changing the world where they saw it falling short; he expressed thanks for the books presented to MPs and for the effort in creating them, and promised that he and his colleagues would read and reflect on their contents.

Among the issues raised by speakers was climate change. Speaking on behalf of the Mercy Global Action Network, Dennis Horton referred to the plight of Pacific Islanders whose homes and livelihoods are being affected by rising sea levels.

“Pope Francis has addressed their plight in Laudato Si’, noting that while they have contributed least to the problems of global warming, they are among its first victims. The Sisters of Mercy are keen to be part of the conversation around looking at options for our Pacific neighbours,” Mr Horton said.

“We are also delighted to hear that our Government plans to ratify the Paris agreement on climate change by the end of this year. The success of government policies depends to some degree on what Pope Francis calls an ‘ecological conversion’ – a change of heart in how we see our relationship with Mother Earth ad its fragile resources.

“A large part of our reason for being here today in such numbers is to tell all those who work in our Parliament that this conversion and change of heart is taking place, and that our leaders can count on our involvement and support.”