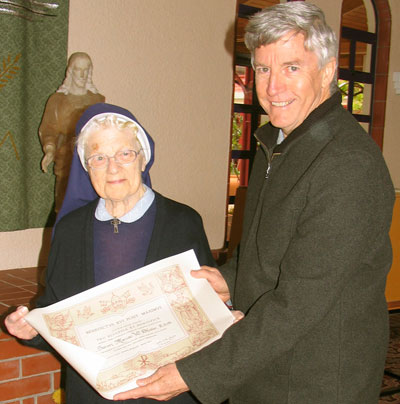 One hundred years of happy living was celebrated by Sister Mary Winefride Blake, a Mercy Sister at Villa Joseph, Upper Hutt on her birthday on 8 March.  Sister Winefride is pictured above with Father Maurice Carmody after her investiture with a Benerementi Medal in 2006.

A long time Wellingtonian, Sister Winefride comes from a very musical family who all sang together regularly. She entered religious life in 1933 and is well known and loved by many people who have been taught singing by her ever since she began teaching bel canto style voice production in 1934 at St Mary’s Convent, Thorndon. Amongst her pupils have been Andrea Creighton, Suzanne Green, Val Sinclair and Rosaleen Hickmott. Even now, in retirement, she continues to teach a few pupils.

Probably the most memorable group Sister Winefride tutored was the St Mary’s College Schola. From 1953 until 1992 this group of 24 college girls, aged 14 – 17, were taught skilfully to sing in beautiful harmonies. Such was the demand for their singing that they were busy almost every Saturday singing at weddings. They also sang on church and state occasions, at public concerts, in competitions and with other groups. “If you were chosen for the Schola, you were privileged to be working with a top teacher and life was never dull,” said one Schola girl.

Each year there was a final college concert in the Wellington Town Hall. Sister used to conduct the girls from behind a screen as in those days sisters were not to be seen taking public credit. In 1961 there was a special Centennial Concert marking the arrival of the Sisters of Mercy in Wellington. At this concert Mr Maxwell Fernie, a Wellington choir director, organist and composer, worked with Sister Winefride especially on the Centennial Ode. Mr Fernie composed the music for the words which Eileen Duggan had created. It was a stunning success from the 5 year olds who began it with their thready voices to the full school, including students from other Mercy Colleges, pouring out the final verse.

At aged one hundred, having seen several popes, many governments and much change in society and Church, one might wonder how life is for Sister. “I have always loved doing what I do, and I am sure that helps. Imagine going through a long life and not enjoying your work,” she says in answer to the query about living so long.

Ad multo annos, Sister Winefride. May you be warmly remembered and richly blessed on this special occasion!