Advent’s promise – a year of grace that never ends

Where does the Year of Mercy go when it ends? The Jubilee will finish, but as Mary famously declared, “God’s mercy embraces the faithful from one generation to the next.” As the image of Mercy’s open doors fade, a new image emerges as another year of grace dawns. It is the living Advent wreath, green with the promise of an abundant nature which, given even half a chance, constantly renews itself. And a circle like Mercy’s own, that is called to widen itself until all are embraced and warmed in its light. 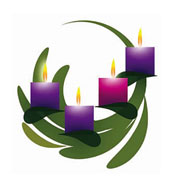 Advent’s promise – a year of grace that never ends